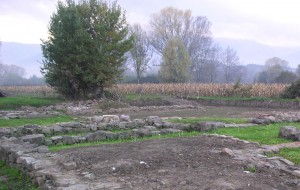 In the south of Lucca, a small alluvial plain crossed by drainage canal “Rogio” is what remains of Lake Sesto which was, until the nineteenth, the second largest lake in Tuscany on which aggregating small economic activities characteristics of fishing, hunting, harvesting and processing of aquatic plants.
From the hill of San Ginese which houses a small village perched in a dominating position, the view opens on the landscape of the reclamation and cultivated fields.
The reclamation was dictated by reasons of hygiene and stability of the territory in addition to the growing need for agricultural land for a growing company. The loose soil and an abundance of running waters have favored the cultivation of beans of various kinds including a known cannellino that takes the name of the country.
Already in the Articles of Task of 1781 talking about beans that were grown in the territory he compitese foothills hills around Lucca. They favored mainly the most fertile areas of flat medium soil, tending to sandy and, in particular, in Lucca and Capannori in soils close to rivers, where it was cultivated in intercropping with maize.
There remain, of this lake areas of Lake Gherardesca in the western part of the “swamp”, at the foot of Mount Pisano within a protection zone along the migratory routes of birds, especially in winter, when you spend the winter numerous species of aquatic birds, and early spring, the substantial presence of migratory birds and the WWF oasis of Bottaccio, a protected area very last remaining strip of lowland forests that once surrounded the lake of Bientina.
The area has, however, of great interest not only the landscape, but also historical and archaeological.
These works have in fact gradually brought to light the ancient past of the area, already devoted to agriculture in the archaeological area of ​​the Black Pit, which retains substantial remains of a country home of the Roman era, built in the second century BC and occupied until Late Antiquity, the remains of a Bronze Age village and an Etruscan settlement of the fifth century BC Recently also, it was discovered a second Roman settlement, built in the second century BC always on the opposite bank of the river, and the ongoing investigation.